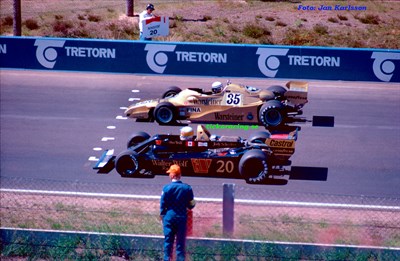 Ticko as a fire marshall at Grand Prix of Sweden 1978. 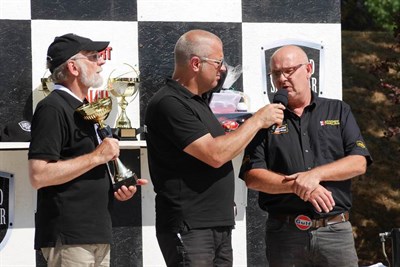 I am a person with decades of experience from the world of motorsport. My first encounter with racing took place back in 1968 when my father brought me to the first-ever event staged at Anderstorp's Scandinavian Raceway. We received our tickets from Sven "Smokey" Åsberg, one of the founders of the circuit, because my father had been working with the construction of the track. The second time I got in touch with the sport was at a drag racing meeting, which I witnessed from the outside of the circuit's signature feature; the airstrip. 1973 saw us take up seats on the "H" grandstand to watch Ronnie Peterson and his rivals do battle in the Hitachi Grand Prix of Sweden, the coutry's - and Scandinavia's - maiden F1 race.

In 1974, I joined Anderstorp Racing Club and thus, in a way, married motorsport. My first appointment was taking care of the storage supplies and providing the marshals with whatever they needed at their respective positions around the track. After a while, however, my role extended to also include transportation of broken-down vehicles back to the pits after the races. Shortly thereafter, I was promoted to a fire marshals' position - an honour back in those days, and one of the highlights of
my life

Getting the opportunity of seeing the cars and stars up close was fantastic. At the same time, however, it certainly wasn't a game - everyone was highly dedicated in the job they did.
With 28 Grand Prix cars on the grid - all fuelled to the maximum - there wasn't much room for playing around…

In between races, we used to volunteer in other areas of the business, both on and off the track. There was always a very encouraging and joyful mood throughout the organisation - from "Smokey" and the board at top level, all through to us marshals. The atmosphere was buoyant, and motivation running high.

Together with some friends, I began building my own racing car from scratch in 1978 - a car I would race with sporadically over the coming years. Once the cost-effective Poprace series was introduced, I built another car - this time based on a Volvo 142. Poprace was a thoroughly enjoyable series that suited most wallets, and a category of racing that I still often find myself missing to this day. I would do a few more Poprace events later on in the 1980s - by then in an Amazon - but I eventually came to the conclusion that it featured a little too much violence for my taste

1983 marked a different step in my career, as "Smokey" decided to educate me for a role as race director for the motorcycling world championship event that took place at Scandinavian Raceway each year, abandoning my own driving activities in the meantime. The race director position was a full-time commitment between 1984-1987, but I still somehow found a few moments to arrange the Swedish Championships and to run some license courses together with, among others, Kent Andersson.

For a couple of years following the motorcycling undertakings, I worked within the administration office at Anderstorp Racing Club. In 1992, while employed as a car retailer dealing with the Volvo and Renault brands, I set up the TicNik Racing team in
union with my long-time friend Niklas Johansson. I took up the role of team manager while Niklas undertook driving duties in the Renault Clio Cup series. We raced rather successfully for three years across Scandinavia and Europe, where
we faced opposition from some famous names, including Janne "Flash" Nilsson and Indy 500 winner Kenny Bräck.

The 1990s were rounded off with administrative work for the local Gislaved motor club and a simultaneous small-scale comeback behind the wheel, this time in karting where I raced 100cc machinery in the Oldboys series.

In 2001, I formed my own company TNM Plast following 15 years of selling cars. To enable myself some breathing space while setting up the firm, I agreed a marketing role for the ETCC touring car races at the track in 2002 and 2003. The latter event coincided with Scandinavian Raceway being named a national sports heritage site, which made me realise the circuit's true historic value and resulted in my first exhibition on the theme one year later, in 2004.

2006 saw the creation of Scandinavian Raceway Nostalgia, a memorabilia museum I built in central Anderstorp with the aid of friends and sponsors. Three years later - in 2009 - I ran the museum on a full-time basis, but changing the name of the company behind it to Ticko Racing & Marketing for 2012 really marks a new dawn as I strive to refine the business for the future. Focus will be on running a core culture and motorsport trade, with the eventual ambition of moving the museum from central Anderstorp to the circuit itself.